Its been a while but its time again for another blast from the past... 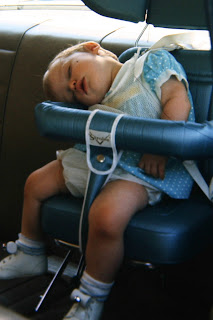 See that? That kind of behavior from moi, gets me into trouble today. I still do that in the car, and it drives poor T nuts. Especially when we are on a road trip. He'll say over and over again, until I wake up "Pilot to Co Pilot, come in Co Pilot". Im supposed to be helping him after all, providing him with company and watching the scenery with him...but no, Im snoozing. Ive been better lately though. Its rather hard to sleep to the voices of three different small people singing three different songs all at the same time.

Look at this car seat too, wow. That would hardly fly today, and its so pretty too. How come I dont get cute litte elephants or ducks to look at. Huh? Why? Of course it probably wouldnt have kept me awake.

And what exactly are those things on my shoes? Were they sending me on a rescue mission for liliputians? Are those tiny flasks of whiskey? Oh, maybe I was a carrier baby. Perhaps they had some people that they needed to communicate with, but didnt want to actually TALK to them, so they wrote little notes and shoved them in those things on my shoes, and sent me over to them. Could that be it? Maybe I had already delivered the message and that is why Im so tired! A ha, it all makes sense now.

Except for maybe why the seat is so HIGH. Is that so the child can see where they are going? Does a child that age care? Obviously not.
Posted by obladi oblada at 11:41 PM

LOL, carrier pigeon baby. And speaking of whiskey, have you seen that dog food commercial (Mighty Meals or something like that) where there's an avalanche and the camera zooms in on this rescue station and out pops this little bitty doxie with one of those barrels under his chin? OMG, it's so adorable.

What year was this photo taken?

That photo is awesome! LOL. Yeah girl, please tell, just when was that photo taken?

I'll bet the Wiener Princess loves that commercial, too.

Still waiting on her blog...

Oh, I KNOW...and she is mad at me. She would have me beheaded, but my hubby has pleaded for my life..so, I have been spared for now. I need to get on that blog....(hanging head in shame).