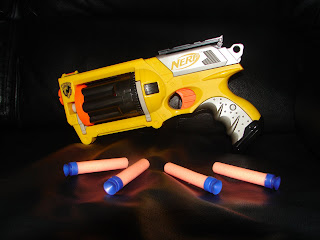 This thing is a lot of fun and I would give it five stars, if it worked right. Maybe its just the one that I bought, maybe for others it works just fine. Its a nerf gun, and it come with six nerf bullets, with suction cups on them, which make it extra neat-o, because you can shoot stuff ( I was going to say "junk" like they would have on Leave it to Beaver, but now-a-days that word means something else, and it would just sound mean) with it and it will stick. This is OK except if you live in a split level, and you have a big window way up over your stairway, where you cant reach and a boy decides to shoot it up there. Then you and the boy must wait until the temperature is just right, and the foam and suction things falls down on its own, which it did.

Its also fun if you have a wild, evil kitten in your home...no, I dont mean its fun to shoot the kitten with it, because that was rule #1, but the rotten kitten was kept busy and out of other evil doings by chasing the bullets around.

The gun works like a revolver and you can load all six bullets in the chamber at one time and then just shoot away; theoretically.

In our case, the thing chamber stopped rotating pretty much within minutes, and so we had to use one hand to align the bullet chamber to the barrell, so that was annoying, you couldnt just blast away. After every shot youd have to adjust and hold the chamber and your mouth just right in order for it to fire, so that got annoying.

And of course, the dart things get lost, especially when evil aforementioned rotten cat carries them off somewhere to a lair or whatever she has...so currently we have a gun which doesnt work right, and never really did and no bullets. Nice.

So, I give this gun a 3 out of 5 stars. It may have got five stars if it worked longer than it did and if it came with some extra bonus bullets.
Posted by obladi oblada at 9:13 PM

My son has a star wars one. I'm not fond of it because he wants to shoot it at our BIG screen.

Oh no!! Ssssh...dont give mine any ideas. Im really surprised they havent thought of that yet.

A teacher in SC got fired for jokingly shooting one of these at a student who wouldn't stop talking in class. SERIOUSLY. So they have to be fun for someone to lose their job over it!

Meg an Aggie in Frisco said...

Friends of mine have one it works great. Sounds like you got a charm!