Today was S's birthday. NINE years old. She has changed so much since she has been here. She is a real little girl who is learning that its ok to focus on stuff, and that she doesnt have to be so hyper vigilant, although she still is at times. She has learned to answer when she is spoken too. It was all too easy for her former FP's to not expect her to answer, they claimed she didnt know why she did stuff. Well, she knew. She also knew that as long as she just shrugged her shoulders, that they wouldnt make her answer.

She also helps in the kitchen. It was said that she couldnt because she couldnt follow simple instructions and was a danger to herself. She burned her hand once at the FP's house, as a seven year old, and was never given another chance; a chance to learn and move on from her mistake. She is also the girl who couldnt bathe herself, according to them. Its more like the girl who was never given a chance to show she could do it. She washes her self and her hair very thoroughly and takes pride in how she looks, whereas before she did not seem to care. She is a girl who can swim now, a girl who can take care of a pet, a girl who does a great job cleaning her room.

She has changed in so many ways, and although Im sad to see the little girl cheeks slowly disappear as she grows up, I am exited to met the S of the future and see what she can be; which is anything she wants to. If you are reading former FP's, she IS capable, she CAN do it, she just needed a chance. 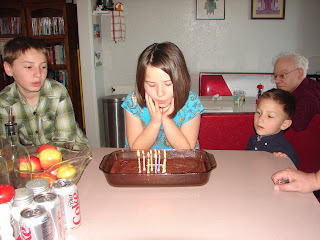 Posted by obladi oblada at 8:43 PM

How sweet! I'm so glad she's has a mom who will let her grow.

I think some fp are doing for all the wrong reasons. How great to share some of her firsts with her!! Your kids are beautiful!!

yes, its amazing what not making her spend 14+ hours a day in bed at her age will teach her! Thanks ladies.

HAPPY BIRTHDAY S! I too am glad she has a Mom that will let her grow.