So, all these "favorites". Dont the people who make this stuff up know how hard it is to pick ONE. Sometimes Im not very good at following rules so....Im doing an "old and new" thing...because honestly comparing some older shows with shows they have today are like comparing apples and oranges.

My old favortie tv show is WKRP in Cincinatti. Do you remember that one? It was a show about a rock n roll radio station staffed by more than a few wierdos. There was Lester Nessman, the station news guy, who could never pronounce any famous person's name right, and who is always screwing other things up too. . There was Jennifer, (the receptionist) who was played by Lonnie Anderson, who was a sweet character and who all men drooled after. There was Bailey, the smart bookish girl, who was the accountant and some time news on scene news reporter. There was the advertising account executive.....an  absolute sleezeball, named Herb, who donned the most hideous suits, and spent his days being sneaky and drooling over Jennifer. There was "the big guy", Mr. Carlson, the stations general manager and son of the stations owner who was terrified of "mommy". In one of the most famous episodes, Mr. Carlson heads up a promotional stunt to drop live domestic turkeys (which dont fly) from a helicopter around Thanksgiving and proclaims "As God as my witness, I thought Turkeys could fly" as the whole city is terrorized by the turkeys falling to their deaths all around them. Then the program manager, Andy Travis, who was kind of cute, and a pretty "normal" guy who always seemed to want to the right thing, but was fought constantly by members of the staff. Venus Flytrap, was the nightime soul DJ. A real smooth cool character, extremely likeable, and last but not least...my favorite...Dr. Johnny Fever. The daytime Rock n Roll DJ. I loved this guy. He acted stoned 60% of the time, but boy did he love rock n roll, and had a "could care less" attitude about anything else...when I was 14 or 15 years old, this was pretty cool.

I used to plop down and watch this in our family livingroom and just howl with laughter at the ridiculousness of some of these "adults". Johnny said the coolest things too, and to top it off, he had various pictures of my heros Mick Jagger and Keith Richards in both his DJ booth and his apartment. The show is kind of hard to explain, but it cracked me up.

In one episode they recreated the night when eleven people were trampled to death at a Who concert (another band I love) in Cincinatti and it was definitely they most somber episode of the whole series...not much laughing going on there. They dedicated the episode to those who had lost their lives that night.

Its been a very long time since I have seen the shows reruns anywhere, and I do have one season of it on VHS. I guess its time I look for it on DVD, I could use a good laugh like that sometimes.

Two other shows I consider my favorites are much more recent. I am a huge Sopranos fan. So is my husband. We are constantly bouncing lines from the series around at each other and cracking up. We have the entire series on DVD and have had many a Soprono marathon...when the kids arent around, of course.

A newer favorite of mine (and my husband's) is Dexter. I guess we really love it because we named our wirehaired dachshund "Dexter". Dexter is the serial killer that you love, despite yourself. He only kills people who have preyed on the innocent, which brings about inner conflict because how can you completely dislike that? When an episode is over and you look at each other with your mouths hanging open in disbelief...you know its good. It is. I love this series...to death (I crack myself up). 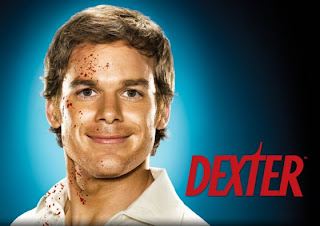 Watch a trailer from WKRP below (but dont forget to pause my pesky play list).

Posted by obladi oblada at 9:13 AM

Girl, i totally loved WKRP!! And Johnny Fever was my dreamboy too.

I'd say my fave show today would probably be Breaking Bad. But I'm a huge sucker for Survivor.

Oh, I loved WKRP and I had a huge crush on Andy Travis! I was laughing about the turkey episode. Remember how Les made people knock on an imaginary door to his office before he would talk to them at his desk?

I think I'm one of the few who hasn't seen Dexter but I do love the Sopranos. I miss my Sunday nights with Tony and the gang. We usually planned an Italian dinner to start the evening.

I used to love WKRP!!! What a trip down memory lane!!!