OK this was fun. First off, I love old houses....southern plantation, Victorian, Gothic,Gothic -Victorian, doesn't much matter I love old houses with tons of character and perhaps a little history too. So my dream house would be a big ol' house of some sort...probably Gothic, or Gothic-Victorian....like these: 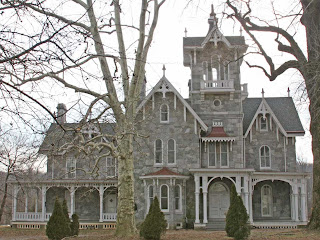 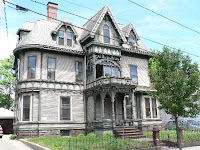 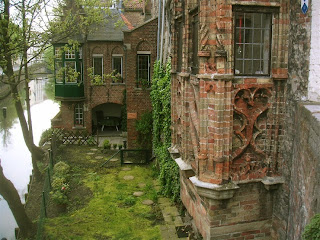 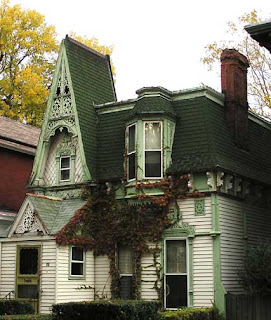 I would do the inside in a combination of Gothic and modern. I would want some of the Gothic architecture to come through, but I wouldn't want it necessarily to have that cold feeling to it that some Gothic interiors can have. I found some pictures on the net here that kind of capture what I would want in my dream home.  Here is a Gothic kitchen that has been restored to reflect a more modern feel: 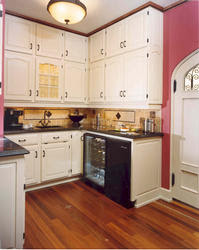 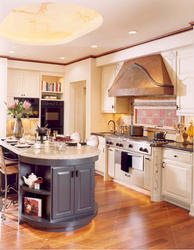 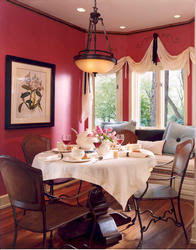 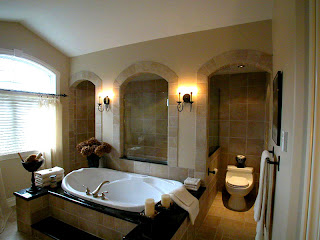 I would want a big ol' Gothic claw foot tub in my bathroom too...I mean a big one. It would have to have a shower in it too though for my family and friends who despise baths and insist on showers (can you believe people who don't like baths? -Hi J!!). Lots of little shelves and nooks to set candles in is a must have for a bathroom in my dream house...oh and a fish tank built into the wall would be nice. I got this picture here.
And I came across this bedroom that I would feel like I was in heaven in.....not real Gothic as it is, but a mix of this with some of the original Gothic architecture would be really nice...I don't think I would ever leave the bedroom..... 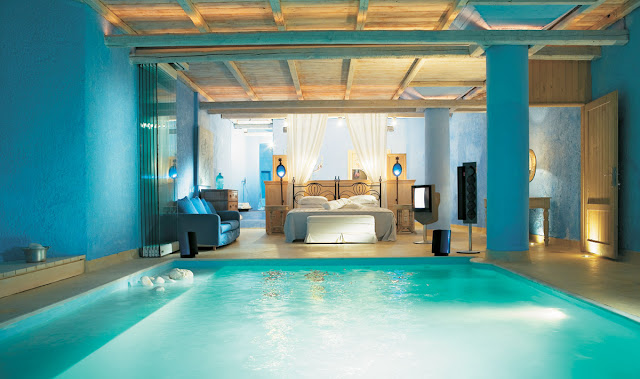 My dream house definitely includes a pool...and this would be perfect if it opened out onto a big balcony. Overlooking the ocean of course...on top of a cliff, with a nice safe path down to the water.....doesn't that sound nice. Of course the kids rooms would all be big enough, with great views as well. Perhaps with a giant video game wall in a playroom. Oh, and a library...what Gothic dream house would be complete without a library? Not mine. I would also have a dog room that opens up into the back garden with their own little safe fenced in area. A nice place for them to be in or out while we are gone. So, when can I move in?
Posted by obladi oblada at 9:14 AM

Now, I love those houses - they're beautiful - but they have a really ghost-y feel to me. Like you're surely not going to be alone... even when you're alone. And I am NOT down with ghosts.

I LOVED the last house! And the bedroom with the pool..That could be fun...Or dangerous when getting up to use the bathroom and you had one too many...I was thinking the same thing Foxy was with the ghosts and all...

Love the pool/bedroom combo - I don't think I'd leave there either...well, maybe once a day for food and more books from the library.

I adore big old houses. That is what we have been looking at over the years. 1.) We have a large family and newer homes just aren't going to cut it. and 2.) Those huge houses usually come with some acreage and 3.) CHARACTER... I love wraparound porches and details. Old houses usually have a ton of woodwork and details galore...Our next house is going to definitely be an older one. And I totally get incorporating some modern into them.

I think what you want is a haunted house! I love all that old architecture, we have an area around here with a lot of the Victorian style homes and people have painted them in highlighting colors, it's cool.
Now what you will need is the maid service to go with the house....