So, I spent a lot of time reading about toys before Christmas because I wanted to know what was what and what people liked. It was helpful. That is what Im all about is helping. Im a helper. So, I want to review some of the toys my kids have acquired since coming home to us. In the foster home, they did not have a lot. It was pretty sad actually considering most kids have a whole room full of stuff. We did not run out and buy them tons of things however, but got stuff slowly. I think spending money on a toy is worth it when the toy is really good. I hate when I buy a toy or anything else for that matter, and it just stinks and I feel like Ive wasted my time, and everyone else's as well.

I do love a good toy. A couple of times during my life, I have tried to get a job at Toys R Us, for like a second job, and they never hired me. Why? Im a good person, and doggone it people like me (anyone remember that Saturday Night Live skit). I dont know the answer to that, but I do know that they missed out. I would have been an awesome toy shelf stocker. Hmmm...maybe they could tell I would spend to much time PLAYING and not enough working. Whatever I still think they missed out. Anyway I will review many toys eventually, right now though I only have time for one as it is late and I must go to work in the morning (Not at Toys R US however, unfortunately for them. Do I sound bitter? Well, I AM)

Ok N doesnt really like to draw on paper, because he thinks he's no good at it. He always tries though and I could tell it was something he wished he could do.

For Christmas he recieved a Crayola Color Explosion, like this: 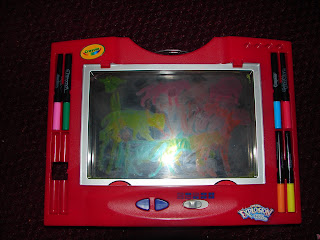 It is pretty cool because you can trace things onto the glass cover and glass tray. If you trace on both, you get a 3D picture. The thing lights up too, so in the dark it is really cool. You can also select which surface, cover or tray to light up, light up both, or flash between the two. N says he gives it a 4 out of 5 stars. The only draw back: It only came with ONE stencil. The packaging shows several stencils, and that is sneaky. Dont make me have Sasha write a letter to the company, because I will! Apparently you can order additional stencils, at an extra cost of course. N just takes pictures from other things and traces those, and that works well too.

That is the only draw back, the stingy stencil distrobution and for that, they lose half a star. Oh and it wipes off pretty easily too, which makes me happy. Look at N, he likes it, he really likes it. 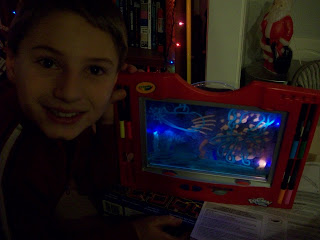 I haven't seen the Crayola thing. That's cool. Do you have to buy special sheets of paper to put in it?

Your treat below looked really yummy!

your post made me laugh out loud. Toys r us is suffering a great loss and they don't even know it :) thanks for the info on the crayola toy. i am now wishing we would have gotten one for Avery. as if she didn't get enough already......

Lisa, it comes with one "stencil" which is just a paper with a drawing on it that kids can trace onto the glass surfaces. You can buy additional papers online I guess. N just uses pages from magazines, coloring books and even other art stencils. As long as they are cut to the right size to fit in the tray, you are good to go.

My first job ever was in high school - I worked in a small educational toy store. BEST.JOB.EVER! Loved working there...I wish I still could. It was so much fun! The crayola thing looks cool but I agree with one stencil is kind of stinky.