So, I have a love/hate relationship with baking. I love it, and have fun doing it when it turns out and I hate it when it does not. I also hate the extra flab it puts on my rear end, but I do love to eat it. This Christmas I made some old favorites and some new favortites that I will definitely repeat.

The old favorite was this pineapple ricotta pie. Its kind of like cheese cake..kind of. If you like cheese cake and pineapple you will probably like this. T, my husband loves, loves, loves this pie. The only complaint he has is that it goes away too fast. I made it last year, but only made one. Let me say that, if you make one, it is just as easy to make two, and I highly suggest it. Unless of course you hate it and then you will be swearing at me under your breath, or maybe even out loud or in email, but it is a chance I am willing to take. Im a risk taker. 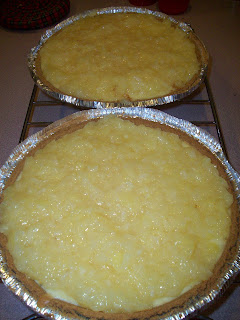 If this looks good to you, you can find the recipe here: 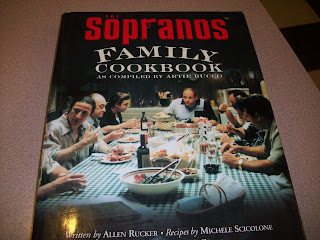 One of the new favorites are red velvet cake balls. You can find the recipe here:

My favorite recipe this year though is for Apple Dumplings which comes from Pioneerwoman's site. The secret ingredient is Mountain Dew. You know the sugary, ridiculously caffenated soft drink which resembles ant-freeze? Yep, that is the one.
Here is what they looked like after I made them: 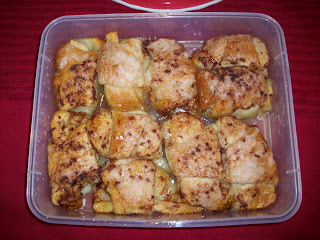 These are very, very good. My husband does not like apples, even apple pie. In fact at first he was not going to TRY this. I think the smell got to him and he tried one. Then he had another. He gave me his version of the thumbs up when he said, "These are terrible honey". Which coming from Sarcasm Man, means that they are great. Of course the kids love them. However it could have been spinach, liver, and worm gut pie, if you add Mountain Dew to it, they are going to want it, at least my kids do. We all agree though that it was a tragic mistake not to have vanilla ice cream on hand, because it really would have put these yummy, and easy little delights over the top!
Posted by obladi oblada at 9:24 PM

oh please come to my house and bake for me!!! please please you can bring the hubs and kids too..

Can I bring the dogs and the cat from hell too?

I just noticed my mouth was watering by the end of your post :)
REally.

Those apple things sound DELICIOUS! If you like to bake, you need to try my peanut butter pie recipe. Let me know if you want it!

Hey! Thanks for your sweet comments on my blog. I found the template at this site - http://www.thecutestblogontheblock.com/
The directions for changing your template are really thorough and easy to follow. Hope that helps! :)