Last night we went to a really cool soccer (uh..I mean football, to the rest of the world)game. It was my daughter's coaches playing against a team from one of the local men's leagues. Anyway, the coaches from the soccer camp S is attending are from all over the world. Her coach, while born in the states, spent most of the whole of his childhood in Haiti, as the son of Christian missionaries. Anyway, we were talking to a woman whose family is a "host" family for many of these fabulous (truly!!!) soccer players. The conversation between her and S went like this:

Woman: Oh, which one is your coach?
S: (insert name here)
Woman: Ooooh...yeah, I know him. He is from Hades (pronounced Hade-ees).

Upon hearing this I spewed a bit of my delicious Orange drink out of my nose, causing both of my sons to look at me in awe.

Needless, to say on the way home from the game (which the coaches, including the one from Hades, won, by the way)we had a talk about the difference between Hades, and Haiti. Though they both may be miserable at the moment, they are at last very different places indeed.

People NEVER cease to amaze me, and this is a perfect example of why.
In case anyone reading this does not know the difference between Hades and Haiti, let me help:

Hades is a synonym for Hell. This is Hell (or someone's interpretation of it):

Haiti is a very poor country about 90 minutes by boat from Disneyworld (that fact alone, blows me away. All those fortunate kids frolicking with Mickey and Minnie and 90 minutes away a whole country whose children are starving and are often slaves to abusive rich masters).

This is Hades; Hades is the name of Greek Mythology's version of the Devil. 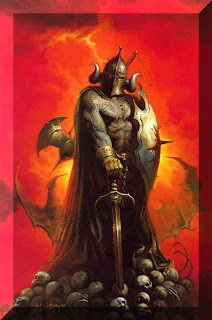 This is a Haitian. A Haitian is a person from Haiti. Notice the difference, please.

Any questions? Good.
Posted by obladi oblada at 1:06 PM

That's almost as bad as V telling me about the book she just finished with the characters named Concrete and Asphflat (Asphalt). LOL!

Seriously, I am always amazed at people's ignorance. Especially the ones that refuse to make the correction, once they're aware of their mistake. Why in the world would you choose to continue looking ignorant when presented with an option?

My husband used to say "take for granite" instead of "take for granted" and it DROVE ME CRAZY. Of course, he uses the correct word now and we are constantly correcting each other... to the point where we say GO LOOK IT UP, I'M RIGHT.

Not that I'm all super smart or anything, but really? HADES?! Come on!

wow, that is really bad. People never cease to amaze me....

Hades? Really? I actually went back and re-read the post thinking that I must've misread it. It's getting to the point that I am no longer amazed by the ignorance of others. That's just sad.

I've never hear/seen the difference between Hades/Haiti explained so well!