I dont really have a lot to say this weekend as we have been just sort of lounging around and the kids have been mellow, which does not give me much to blog about, so I will review a toy or two.

My bro got A the Cariboo game made by Cranium, whom I am growing to love. Besides, what an awesome name for a toy company. I was thinking about opening up a record store years ago, with a friend of mine and we were going to call it Ear Candy. Is that cool or what? Anyway, I digress...

Here is A and his game on Christmas morning. 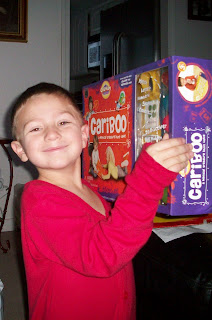 It is a fantastic game for pre school or Kindergarten, it may be a little on the easy side for A, but it is good excersise for his mind, and it keeps him fresh on his abc's and 123's. Its bright and colorful too, which impresses me, because Im simple like that. Throw a red bead into the sunlight and Ill be entertained for hours..

You have these bright colored balls that hide inside trap doors after you drop them down the chambers. You have to unlock trap doors that correspond with the cards that you have in your hand. For example a card might have the letter A on it, and then you find the trap door with the picture of the item that begins with A, and you unlock it; if a ball is in there, you take it out and put it in the round hole on the side of the game. Collect all of the balls and when you put the last one in, a treasure chest opens and you win. Very cute, and he likes it.

My suggestion for the manufacterer would be to re do the packaging so that there is a place for the cards when the game is stored. Oh and a little holder for the cute little key that opens the trap doors. Im afraid its a matter of time before it gets lost, or falls out of the box and then the kitty from h-e-double hockey sticks runs off with it in her nasty little kitten mouth.

So, I would give the Cariboo 4.5 stars out of 5. I just asked the real experts in the house and they all gave it a thumbs up. N said the only thing he doesnt like about it is that the cards that go on the trap doors to tell the player what they have to match the card in the hand with are too hard to flip over (they are double sided, one for easy and the other for advanced, which is a cool feature). 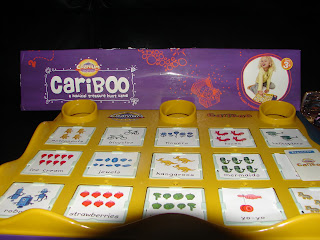 This is the game board, showing the trap doors and chambers. It doesnt show the cute letter treasure chest though, so trust me its cute. 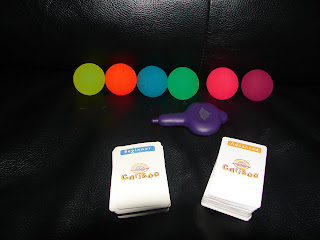 This is the brightly colored balls (arent they purty?), the cards, one deck for beginner and one for advanced, and that little doomed key.
Posted by obladi oblada at 6:15 PM

This sounds really cool! We're always looking for cool board games. Do you think it's too young for an 8 y/o???

Thanks for joining up on my daughter's site. She hasn't seen her "stickers" yet today but she's going to be real excited. Can't wait to see what she's got to say today.

That games looks like a lot of fun! :) V has these two card games that she loves called Slamwich and Rat a Tat Cat. Those are always good if you need some more game ideas!

Lisa, I think it would be too young for J. My S is 8 and she thought it was fun the first time, like a novelty thing, but it really is too easy. I cant wait to read J's blog more.

Erin, "Santa" put Slamwich in N's stocking and he loves it. I havent plaid it with them yet, but I will. It sounds fun.

Wow..I just love the nice variety of kids games that are available now!