I want to talk about this picture for a second. This is me. Its the 70's as you can see by the groovy pattern on the lawn furniture, which isnt on the lawn at all. Its on a patio, so I think it is patio furniture. See those evil things on my legs? Tights? I HATED tights, they were so itchy, which is probably the reason for the look of agony on my face. I would pull on them, and scratch and pull on them some more. Those and turtle necks, HATED turtle necks. I would gag and cough whenever my mother made me wear one. Im sure most of it was for effect. I was a lovely child. S has tights, and she doesnt seem to mind them. I would never force tights on anyone who didnt want the tights, because that is just wrong. I may have adult issues now because of the tights. In fact Im sure of it.

Oh, and see this dress? My mom just told me something about the dress. Apparently it was a Buffy line. Remember the show Family Affair, with Buffy, Jodie, Sissy (did she even have a real name?), Uncle Bill, and Mr. French. Oh and dont forget Mrs. Beasely, the doll (MRS.? Was she married? What exactly is HER story?). Anyway, if you dont remember the show by now, you dont know it. Anyway, apparently (I like that word)there was a line of little girls clothes modeled after Buffy. There was a store in Los Angeles that sold the stuff, and my mother went there and bought me one. We lived in Anaheim, so it was not a very long drive. I just learned this and thought it was interesting. 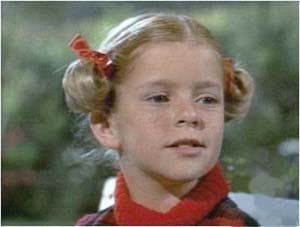 Oh, this is Buffy...Buffy, this is everybody. In case you havent met.

I feel forever connected with Buffy now. Oh, isnt she dead though? Didnt she have one of those tragic child star stories? I think she died of a drug overdose as a teen or something. Anyone know? Anyone care? Probably not, so never mind.
Posted by obladi oblada at 7:31 AM

My mom loved old reruns of that show, so I know exactly what you are talking about!!! :)

I loved that show. Buffy was my favorite. It seemed like that show was on one day and gone the next.