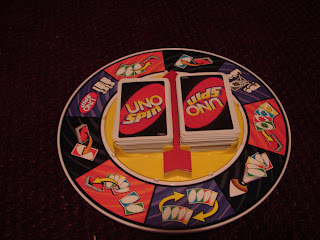 This week's toy is the game UNO SPIN. Now, what the heck ever happened to just plain UNO? It was fine, it was simple. Now there is like a billion different UNO games like Uno explosion, or something like that, where the cards are spit at you. Nothing so elaborate here, the cards on a spinning thing and depending on where the little arm lands on the wheel of fortunesque dial, you have to do different things. You may have to switch hands with the person next to you, or you may get to discard all of one number or all of one color,or you may have to accumalate a bunch of cards from other unfortunate order of the wheel. I dont think there is a whole lot of skill involved, just a bunch of luck, of which I have little of when it comes to these things. So, its a fun game, theres a lot of laughing and "oh, man" going on. I still think I would rather just play, plain, simple old Uno.

One little warning, if your kids are on a different floor than you are and they are playing this, youll hear the spinning of the wheel and you'll be like:

What on earth is that? Now whats broken and making noises? Is it the furnace, dish washer, what?

At least thats what happened to me. That sound travels and unless you have all your brain cells (which is probably not the case if youve spent anytime in motherhood at all), you too may wonder what that noise is. I give Uno Spin a three out of five stars.
Posted by obladi oblada at 9:23 PM

this is not at all about your toy review... found you through Lisa's blog and just wanted to say hi, we went 0 to 2 in 42 days and so much of what you say is the same over here.
As I was reading your review I was listenting to odd thumping sounds here too, not a toy but the cat jumping on and off the bunkbeds!
Have a good day.

Hi J! I can relate to cats and punkbeds! Our little rotteness runs up and down the ladder, she is a nut! I hope you stick around and read some more. Thanks for commenting.

There is no way anyone can improve upon the original UNO. Greatest card game EVAR!!!12!!

lol, that is so true! Now they have machines that hurl cards at you, I am surprised no one has reported paper cuts to the eye! That spinny thing looks kind of cool though.

All those classic games seem to be getting retrofitted for the new age. Calculators and such being added to Monopoly? The Monopoly I know is slow, boring, and a single game lasts six days, with plenty of cheating all around. I don't even recognize this new Monopoly.