Its my first Mute Monday
and the topic is "Outrage". I thought of something that outraged me, and wasnt sure if I should do it on that or not. I made up my mind to do it, when I went on over to Heather's place and saw that she had done it. WARNING DONT CLICK ON HEATHER'S LINK IF GRAPHIC ANIMAL IMAGES DISTURB YOU (They do me, but Im addicted to her blog and I didnt know what was coming...Im ok though, I think. I want to KILL someone, but I'm ok...been there before as you will see....). My outrage is what some idiot, cruel hearted, not worth the air they breathe did to a lab mix and her pup; didnt feed them for who knows how long and then just dumped them off to fend for themselves or die. Below are the pictures of Bailey and Lucy and under the pictures is their story. 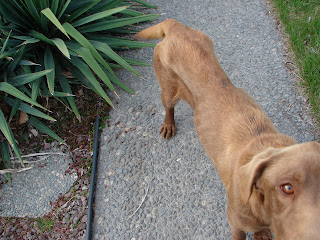 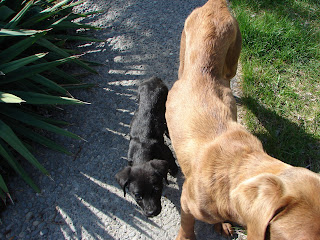 These were actually taken a week or so after we found them, after nourishment and vet attention...Bailey (the mommy) is still very skinny in these pics, as is the pup (Lucy), however Lucy's worm infested and bloated belly has gone down to normal size in the picture.

I was getting ready for bed one night when T called me and said he needed me for a rescue mission, he said it was a mother dog and her pup, so naturally I got dressed and went to see what he had. It was horrible. I dont know how Bailey was standing up and walking, she was a skeleton dog covered in skin and fur stretched tight. With her was a little black pup, huddled under a shelf in an old building. Her belly was the size of a large canaloupe and the vertabrae on her back and her hip bones protuded from her. I started to tear up immediately. Bailey just stood and looked at me with her big soulful eyes...so trusting, so hopeful in the face of what she had been through, it truly broke my heart, and still does when I think about it. Little Lucy was limp, and very sick from lack of nourishment and the worms taking every scarce bit of nourishment away from her. On the way home both vomited huge amounts of black stuff, who knows what they had ingested in their famished state, I imagine anything would do.

From past experience I knew that the wrong answer was to feed them a big ol bowl of dog food, that would only make them sicker and may even kill them, so when I got home I gave them a tablespoon of food, a little bit of water and then gated off my bathroom and made them as comfortable as possible. Bailey's loving nature touched me deeply, and the only thing I could do for her at this point was hug her and tell her I was sorry. I was ashamed to be a human being. I noticed around her neck was raw and bleeding where someone had tied her up too tight around her neck for a very long time.

I didnt sleep at all of course, and as soon as they were open, I took both to the vet. The vet said they would have died within a week and that her other pups had probably died, as she didnt have enough to feed them all and that most of her nourishment went to feed Lucy, while she was getting nothing to replace it. They stayed in the vet office for a couple of days, free of charge (God bless them!) then I brought them home. They got healthy, and Lucy got onery(sweet, but onery)and eventually, even though I wanted to keep them both (we had three of our own at the time), we found them homes with people we knew. They are both doing well, and happy and being fed!!!! Imagine that. So, that is my outrage...that someone could just not feed a dog, a sweet dog and consequently her pups. Im thankful that they (or someone else)turned her loose with her pup so she had a chance...as small as it might have been. So, please if you see an animal in need, do what you can to help, even if it taking it to a shelter to get the help there, or call a rescue organization, there are many breed specific one's out there that are good too. If you are looking to add a pet to your family get online and call your local rescue groups or animal shelters. A loving dog like Bailey or Lucy may be waiting for you. 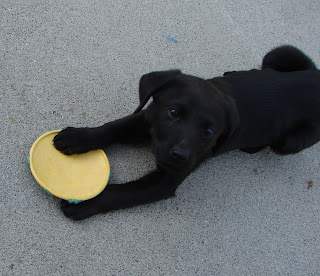 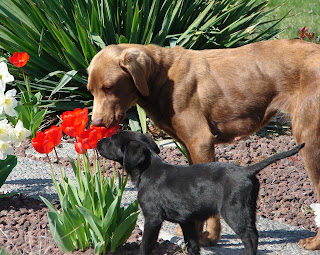 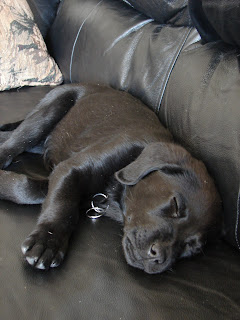 A much healthier, happier very sleepy (and spoiled, as she should be)baby Lucy. 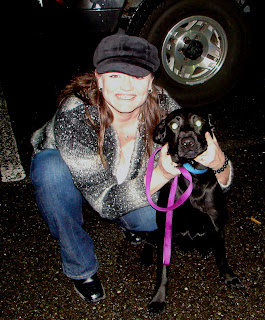 Lucy and I visiting 8 months later!
Posted by obladi oblada at 1:50 PM

excellent lesson here. Don't get a dog if you're not going to care for it!

Those poor babies. It sounds like you do rescue...we live out in the country so people drop off their strays. It is unbelievable the state that some of these poor dogs are in. I like to plump them up a little bit and teach them some basic stuff (sit and stay), then we work with our local Humane Society to find them homes.

Poor sweet babies. Thank you for saving them. Love the couch picture! What a QT pie!

Torina-I knew I liked you!

HC: Thank YOU for inspiring me to post it...and thanks for what you do with pibbles.

Lucy is a beauty!

Rarely do I click on a blog with songs and actually like the song playing- you've got great taste (or at least similar) taste in music!

Lucy and Bailey are adorable gorgeous dogs. If their former owners and other abusive owners could measure the full impact of "WHATEVER YOU DID UNTO ONE OF THE LEAST,
YOU DID UNTO ME
Mother Teresa of Calcutta"

Thanks! I sometimes log onto my own blog to listen to my play list...I need to rotate songs around and get some new ones though. Yes, Bailes and Lucy will always have a special place in my heart.