Last week was the A's Kindergarten graduation. It was a cluster from the beginning. First of all, I knew NOTHING about it, until the day of. He came home wearing a note that said, "Kinder graduation tonight 6:00 pm". Ok. A little notice would have been nice. I mean, some people may have known that kindergarteners HAVE graduation. I didn't. I've never had a kindy gartener before..so cut me some slack. Let me IN on these things.

So, anyway, I get home at 5:30 (T told called me and told me about the note while I was at work), shoveled some dinner in my mouth, got A changed into something cute, brushed my teeth and hair and flew out the door. So we had approximately 10 minutes to get there. No problem. We live literally 1 minute from the back gate of the school. That is one minute walking. 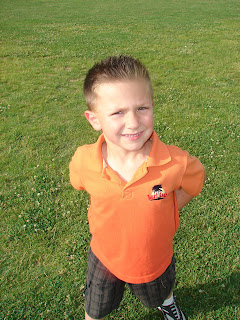 A, pre-Stoopit-Mommy-Moment. Isnt he cute? All ready for "graduation".

So, we go in the back gate, which is as always, unlocked. We always do this, so do about 50 other people who live around there and have kids that attend the school. I have been to MANY events at the school, in the evening, and we ALWAYS walk through the back.

So, A and I traverse the field, and the playgrounds and are making our way to the front of the school, and lo and behold, the FRONT gate is locked. Now it just took us about 5 minutes to make it from our house to the front gate. In 95 degree weather. So basically, we are at the school, but cant get IN the school, because our access to the front door is locked (all other doors are usually locked so we have to use the front door). This front gate is NEVER locked when there is something happening at the school. I mean, HELLO!!!! So we stand there. I see the parking lot FULL of people for this graduation, so Im faced with a decision. Do we walk all the way back through the field, in the HOT weather, AROUND TWO blocks, to the front of the school? If we do that he will probably MISS his graduation. Nope, not gonna let that happen.

Here's where stoopit Mommy moment, #1 comes in (Yes, there are more than one on this night). The stupid gate is only up to my chest. Its not like its six foot high or something, so I decide we are going over. I lift my innocent, extra cute 6 year old boy over the fence, and expect that he knows how to get to the ground himself. Nope. I guess none of his previous parents engaged in jumping the fence of state property before...or any other fence evidentally. Something I did ALL the time as a kid his age. Anyway, the fabric of the fence gets caught...on his belly..on his SKIN. So he's crying on the other side of the fence, with a big huge scratch down his tummy, which is bleeding. So, I go over the fence..and just as Im doing this, the numbskull janitor comes out. With the key to UNLOCK the gate...minutes before the ceremony. Bright one. I hurry past her, because Im afraid I will swear. We run into the school and into the bathroom, so I could attend to the injury I caused my child, which Im feeling absolutely horrible about.

I think the bleeding has stopped so we run and find his class. His teacher wants to know why he is upset, so he shows her his tummy, which is bleeding again. I whisk him away to the nurses office, where there is NO nurse. The principal is there though and kindly bandages up his little tummy (A's not the principals). He asked if A fell. I said no...and proceded to tell him the truth. Luckily, he knows us and all about the kids, so he shrugs it off.

I thank him and we run back down the hall, just in time for A to join the line with his class to go into the gym. I go into the gym...and of course, NO seat. So, I stand in the very back against the wall, figuring Ill at least get a glimpse of him. Nope.

This is why I hate people: Apparantly some of the other people without seats decided they were going to stand too, IN FRONT, in the MIDDLE, so no one behind them could see OR get pictures of their children. 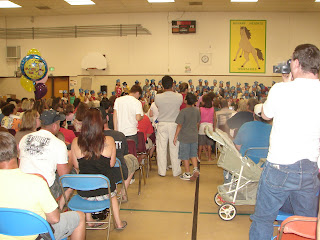 It got worse. Then people WITH seats stood up, one guy with a seat, stood the entire time...near his seat, so no one else could have it. Moron. Below is the picture of the moron. 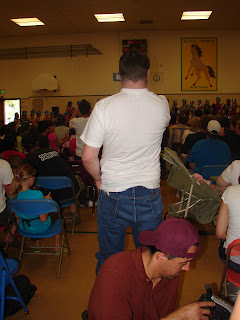 Hey, I couldnt get a pic of A, so I made use of my time and camera for blog material. Im an opportunist.

To top it off, it was 110 degrees in there. I was miserable, I couldnt see my kid...I was guilt ridden for putting him over the fence, I was hot, and now I was irritated at the general public.

The ceremony ends and I go to the caffeteria to pick up A. Im trying to be in a better mood for him and its working until I realize I have NO idea where my keys are. This is where stoopit Mommy moment #2 comes in. I start to panic. My life is on my keys. My office keys for work...Im the only one that can get into 50 percent of the areas in my building. I AM the key holder (NO, Im not the janitor, not that there is anything wrong with that, UNLESS your one that forgets to unlocks gates during an event). 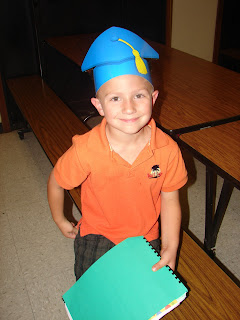 A in his paper hat. Smiling despite his Stoopit Mommy induced injury.

We, me, A, the Principal, and the Music teacher, search for my keys. Not in the gym, not in the cafeteria, not the bathroom, not anywhere in between those locations and not in the lost and found or office. Nice. So, I decide to retrace my steps outside. I walk through the gate which is now OPEN (grrrrr....)and across the field and back home, checking the ground for my keys. No keys. I go inside the house.where.I.see.my.keys. Laying on the counter. I never brought them.

Im relieved but frazzled. I quietly go into the bedroom and have a nervous breakdown. When Im done with that, I have to show the huge stomach gash across A's tummy to my husband. That was fun. The guilt from A's injury is still not gone, even though the injury itself is almost gone.

Moral of the story: Skip Kindergarten Graduation.
Posted by obladi oblada at 10:21 AM

HAHAHAHAHA! That was priceless. :) Sorry, you know I love you, but that is TOTALLY something I could see myself doing. I didn't know all kindergarteners had graduation or I would have told you. Ours was during the day - like at 9 am or something.

Don't feel bad - you could have slathered your child in 70 SPF sunscreen three times at the waterpark only to come home and find her pale skin burned to a crisp. It's amazing that she still puts up with me.

Look at the memories you are creating. He will always have that story to tell...hehehe

AND, man! HE IS GEORGOUS!!! Ask him if he has any marriage plans?? LOL

As far as the dirt bags that stand in front of you...I HATE THAT! Or the ones that talk all through your child's violin solo. People can be so rude!

What a cute graduate and there's no trace of a bloody tummy at all!

Very interesting. I wonder if my kindergartners had a graduation that I did not know about. Ooopsy.

Erin: I never even thought to ask! Who da thunk?

Corrine: Yes, and hopefully not a nice scar to go with the memory.

No marriage plans yet.

Moodswing: If the principal had not have bandaged it, blood would have soaked through his shirt.

hee hee! Thanks for sharing! Don't you feel the catharsis? Feel better after having written it? My favorite part is: "below is a picture of the moron." lol. that really struck my funny bone.

Bless your precious heart! I feel so awful for you but you were just trying your hardest. Nothing wrong with that.

Also, people suck. All I can say.

wowwwwwzaasss! I do not have kids (of course) but I sooo feel... feel... feel something! lol

this whole story had me wow, whats next. And somehow, I just knew that the gate was going to be locked. And even tho A got hurt on the gate, at least he was a trooper and seemingly able to still enjoy the night.

And why is it that the graduation date/letter wasn't sent home in the begininning of the school year? that would have been helpful, right?

Well anyway, what an eventful evening you had! lol

Funny: Thanks! I felt a little mean writing that part. Ok, not really.

HC: Yes, they do. Thats why a lot of the time I surround my self with wieners, and terriers.

Almost: Yeah, the day OF graduation is a tad late....

CM: Thanks for coming by! Yes, quite the ordeal, and neither of us will forget...

My stoopid moment was forgetting to give SK her ADHD meds at lunch on Friday AND Saturday. Too busy frying by the pool to remember. Geesh!