Well N had a birthday a while ago, and Im just now blogging about it because I am slow and often prone to fits of laziness. Im sorry, that is just how it is sometimes.

So, it was a special birthday for him, he is now a double digit kid, instead of a single digit one, and he got to meet his Uncle Rabbit. Rabbit is not his real name, its a nickname he got as a kid, and my husband still calls him that, so do I. Now the kids do too, and it is very special.

Uncle Rabbit was in town from NY, to go to hunting with T, and N got to go with them for a few days. Part of his issues stemming from moving so much and not having consistancy crept up a little during this time (N's issues, not Uncle Rabbits, not saying the he has issues, but, oh heck, you know what I mean).

When I picked N up from where I met T at the end of N's hunting time, he was teary eyed and said that he would miss Uncle Rabbit. We told him that Uncle Rabbit would be staying with us for a few days before going back to NY, but he was still teary. This isnt the first time that he has done this with people he just met, but liked, and wanted to spend more time with. The therapists pointed out that it could be because he is used to never seeing people again when he says goodbye. Good point, I wish I would have thought about that. Poor kid. His life has been a little like going to summer camp and meeting friends, and never seeing them again. His whole life has been like that....I cant imagine.

Anywho, here are some photos of his bday and the meeting with Uncle R. Hi, Uncle R and Aunt M, if you are reading!!! Hello to Kristina and to Matthew too! 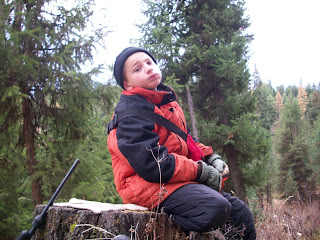 This is N on the hunting trip, he looks thrilled...he said he had a great time though. 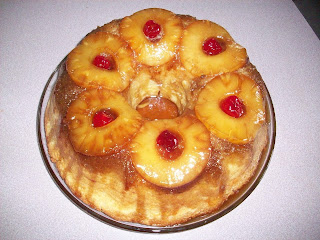 Another Beeauuutiful cake made by my hubby T. N wanted upside down pineapple cake for his bday. 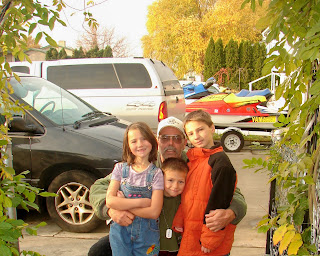 Here the kids are with their Uncle Rabbit. They are still doing and saying little things that he taught them. This is the morning they left for hunting.
Posted by obladi oblada at 9:09 PM

I so want the recipe for your pineapple cake...Happy Birthday and I heart the pics

Great pictures! So glad he had a good birthday! :)