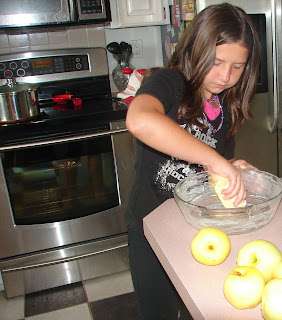 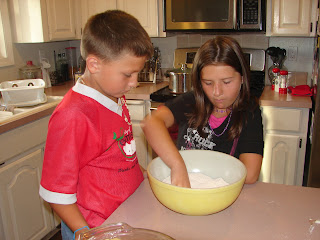 On Saturday night I made homemade veggie./beef stew. The same kind, mind you, that I HATED as a kid. Well, I like it now. As a friend pointed out to me: Im grown up now. My kids didnt hate it though, and thats cool, because it really was good and pretty friggin' easy too. I also made apple crisp...with help from S. Apples were from our backyard, which always makes it better, IMO.

While I was channeling Betty Crocker, I had removed the garbage can lid so the boys could take the garbage out..and in the process, I misplaced it. The garbage can lid. Yeah, I did. It took us TWO days to find it. We were joking that one of the dogs took it outside and buried it. I was really freakin' out about where the lid went and while I was at the office doing some extra work, my husband found it. Where? Where does one lose a garbage can lid inside of a house?

In the pantry. Yep. We have a huge drawer thing that slides out from the pantry and somehow the garbage can lid was put in there, and the drawer pushed closed. Yeah, its a big drawer. Yeah, its gross and yes..I had to scrub the drawer and contents down. Ick. But hey...with THIS around, is it any wonder I get destracted: 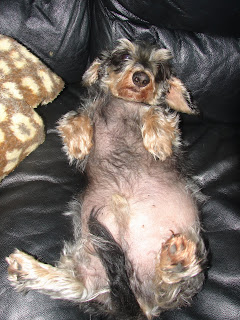 Posted by obladi oblada at 1:58 PM

This is funny in a million ways!

See? I told you I'd be here earlier, but something went haywire with my computer and so NOW here I am!!
I love apple crisp. Did someone say apple crisp??

That is too funny. I always put things in places where I KNOW I will find them...I'm still looking for those things. lol!

Apple crisp sounds yummy! I want to put in a couple of apple trees next year. All my kids except the oldest love our vegetable beef soup.

Awww, I just want to rub that belly. So cute!