School is in Session

Yesterday was the first day of school. I took the morning off. I tried to walk L to the bus stop, but I could see his silent protest, so I only walked him to the edge of the driveway.  He's a big middle-schooler now. I threatened to ride the bus with him too, just to be mean. I did walk the other to school and stayed with them until class started. Saw where they were sitting and who they were next to.

I have a great feelling about A's teacher this year; no more being ignored about my child this year, hopefully. This one seems like she is experienced and has a clue, which is helpful. S's teacher seems great too, but then again I didnt have the year with her last year that I did with A and his "teacher". 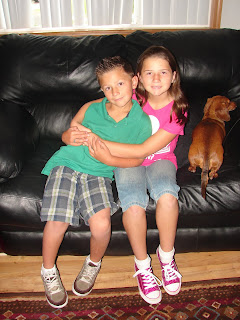 L's first day of middle school went well and he said it "wasnt as bad" as he thought it would be. He was very chatty and happy when he came in. S and A were happy when they came home too. A informed me that he "didnt even get a yellow or orange card, just a green". I was happy to find out that green meant he was good. Apparently there is a red card and a brown card and those mean a call home and a trip to the principal's office. I dont need any of THOSE, thank you very much.
Posted by obladi oblada at 7:45 AM

Glad you all survived the first day. Our oldest started school last week with some groaning that has now turned into "not-so-bad" looks.

I think the red card thing was developed by a soccer fan.

My girls started school 2 weeks ago...My baby started kindergarten...I was a mess but both girls have amazing teachers...Glad your kids enjoyed school...Thanks for stopping by and sharing that amazing story with me!!!

Good to hear that your first day of school went well.

Thanks for stopping by and following my blog.

YAY for better teachers! You deserve a good one after last year :)