This morning in the news....

...they were reporting about airplanes hitting birds and they actually said this:
"....an increase in the number of birds and other mammals that air craft has hit while in the air....."

My question is this; what other mammals are in the air? Ok...bats. Aside from that I cant think of a single one that belongs in the air? Can you? I dont even think bats fly as high as birds either. I could be wrong about that.

Oh wait, there are the cats and dogs when its raining them, pigs when they fly, and the occasional elephant that jumps "so high, that he didnt come down till the fourth of July" (See Aerosmith song, "Walking the dog").

Then there was the report of the man who had fought to keep his pet tiger years ago, and apparently won. Well....he died. The tiger KILLED him. Well...duh. I am constantly amazed at these people who feel it is a good idea to keep a six hundred something pound CAT (evil) for a PET. Tigers have HUGE claws and HUGE teeth..and even if the Tiger is a pet..it is still a WILD animal and if it gets pissed at you, you are probably done. You must FEED the tiger, and clean the tigers cage...meaning you must go NEAR the tiger. Im just sayin'......its dumb. So, stop it. Tigers in zoos, or an animal refuge, fine. At your house..not so much.

On a more serious note...the woman who hid Anne Frank's family during WW II, passed away. Her name was Miep Gies. she was 100 years old and she kept the diary which young Anne wrote. She was a hero. 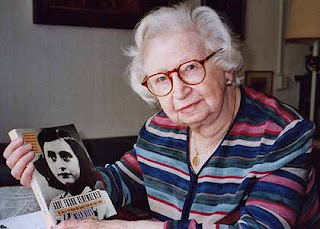 Posted by obladi oblada at 8:02 AM

I so know what you mean about people and pets!
Sad about the lady who hid Anne Frank. What an incredible story that is.
Btw, is it just me, or is the font on your blog really light? For some reason on my computer I have to highlight all the text if I want to read it? It could just be my browser though?

Me too - I had to highlight to read...Hey - Maybe this is like secret private invisible blog ink?????

Oh geez..those people who want to have ginormous cats for pets and stuff almost, ALMOST, (not quite) deserve to be eaten. Dumb.
And yeah, flying mammals? This is another great, wacky post!
Love the reference to the Aerosmith song!!!

Yep, the font needs to be darker, but I LOVE the new background. Which reminds me that I need a new one too.

Kinda like the people that own monkeys and they end up ripping the owner's (or someone else's) face off. Once again, a monkey is a FREAKING WILD ANIMAL. It is not a pet!! And even with all the warnings and stories, there are still people that do it.