This morning I go down stairs to take some laundry out of the dryer and notice that there is dog poop in the hallway. Now, the wiener princess is a true dachshund through and through and they are notoriously hard to house break and have many "accidents" in the house.

Now, I know I heard the boys bathroom door shut so I know one of the boys had used it. The little puppy package was in front of the bathroom door and was not fresh, so my investigative skills told me that the dog poop was seen by this boy.

N's door was cracked so I went in there and he was laying in bed, his eyes open. So I figured I would inquire as to why he didnt pick the stuff up and why he left it for me. I mean he was awake, near the bathroom, had to pass the poop, TWICE, was it really too much to ask for him to pick it up with some toilet paper and flush it down the toilet? Evidentally it was.

Me: Good morning. Tell me, did you step around the dog poop to get to the bathroom?
N: No, I stepped over it (completely missing the point).
Me: Why didnt you pick up, you know to help me out a little.
N: I thought I would get it later, when I was really awake.
Me: Oh, you mean after your brother comes out of his room and steps on it?
N: Oh. I didnt think about that.

I thought for sure that conversation would be the craziest of the day, but I was Oh So Wrong. What is even crazier, is that the craziest conversation so far today didnt come from a ten year old boy, who is half asleep, but from the Guy in Charge of Everything (GICOE) at the place I work at. A fifty something year old man (Im guessing here, he is at LEAST fifty).

I was in the hallway at work and mentioned something about the safety guy doing a walk through of the building today. This GICOE, standing next to a fire extinguisher, which I am responsible for checking monthly, grabs the inspection tag and examines it. 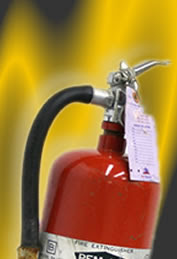 True story. I could NOT make this up.
Posted by obladi oblada at 8:57 AM

OMG. WOW. Work sounds like the Twilight Zone but without the cool music.....

noooooooooo, come on. You can't be serious about the GICOE!

BWAHAHAHAHAHAHAHA ABOUT G.I. Coe
Did he look embarrassed? Please tell me he turned red. hahahaha

HAHAHA...this made me laugh out loud.

MDX2: The only cool music comes from my office:)

Essie: Im as serious as a heart attack.

Amy: Frighteningly, no. No embarrasment whatsoever.

JM: Glad to make you laugh!

What a complete MORON! Duh...

That is exactly why he is a GICOE instead of a GWDAW (guy who does actual work). LOL!