The Best Mother's Day Ever

I had an awesome Mother's Day. I really, truly did. I can remember Mother's Days gone by, where I didnt even want to get out of bed, I was so depressed. That was when I didnt have any kids, but really wanted them. It was awful...I would go to church and I would just be sad and usually end up crying. I hated it. I celebrated it for my own mom, but if it wasnt for her, I would have pretended the day didnt exist, it was less painful that way. My first Mother's Day as a mother, I had had the kids for exactly 3 days. I was still in shock. Last year, I think THEY were still in shock, and still didnt believe they were there to stay. This year, the shock is gone, and Im certain they know they are home for good.

This morning I woke up at 6:20 to noises in the kitchen. I got up to let the puppy out (yes, a puppy, Ill explain in a different post)and see what was going on. L stopped me in the hall and told me that they were "setting up". I said "can you 'set up' in an hour or so?" Looking slightly dejected, he and A went back downstairs. I told S to get up and go outside with HER puppy and went back to bed.

I lay there feeling cranky and guilty..so when S came in, I told her to tell her brothers they could "set up" now, if they were quiet about it. Once I heard them come back upstairs, I let myself go back to sleep.

About an hour and twenty minutes later I woke up and again was stopped in the hallway by L. He informed me that they were ready but I had to be blind folded. I relunctantly complied and he tied a kitchen towel around my eyes. I was led by the other two into the dining room, and they took the blind fold off. They had set up the table were thier cards, an electric candle and in my vase were several plastic and paper flowers.

They sat me down and gave me the "menu". I have posted a pic of the menu below. It said:

I ordered two waffles with butter and syrup. They brought me my coffee...which I politely put in the microwave because evidently they made it an hour earlier and it was with one of those one cup makers, that dont keep it warm.

The flowers L gave me were wrapped in a paper with words describing me.
A gave me paper flowers with things he will do for me. I know his teacher probably laughed because along with "take out the trash" and "feed the cat" was "help you find your keys". I have a problem with keeping track of my keys, now his teacher knows this too.

S gave me the lamenated book she made for me in class, and its one of the greatest things I have ever received. The teacher had typed on top of each page things that kids would answer about their mothers. I got a kick out of a couple of these pages like:

What kind of little girl do you think your mom was?

HA!!! She has that backwards.

What does your mom do in her spare time?

S's answer: My mom watches the news in her spare time. She wants my brothers and I to go downstairs so she can watch it. I guess there might be stuff not for us.

For the record, according to my husband what I watch isnt "news". I watch Nancy Grace and other true crime shows, like stuff on ID (Investigation Discovery). And no, they shouldnt be watching it.

This one broke my heart: Why did you get your mother and not another mother?

The committee process when we were selected to adopt them was briefly explained to her, and obviously she was listening. Except for the part about the other mother. That other family really wanted the kids too, thankfully, the other mother did get selected for some kids, so it all worked out. I excused myself to wipe away the tears that were threatening to bust loose at this.

What ingredients are mothers made of?

S's answer: Ingrdiants my mom is made of is are Johnnys seasoning, candy, love, trees, coco, cereal, and spples. Maybe some oranges, broccly, carrots, ranch, thousand island, and buffalo wings too. I think she left out coffee, puppy breath, and a dash of sarcasm.

It couldnt have been a better Mothers Day. After church we took my mom to eat at Red Lobster, it was pretty much a perfect day. Oh, my most awesome husband got me a bracelet and earrings, which are awesome, but they didnt make me cry. I hope all of you mothers had a great day too. Those of you who are waiting...hang in there, it will be well worth your wait. 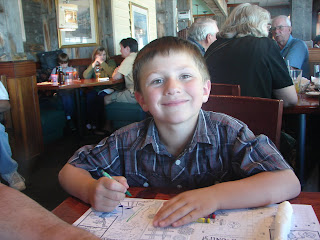 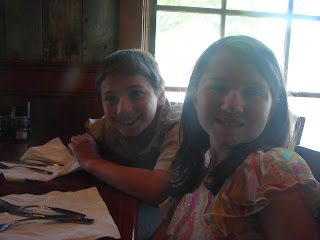 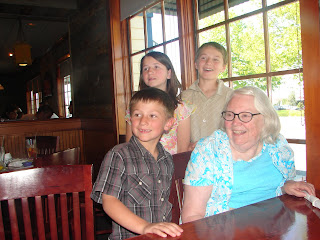 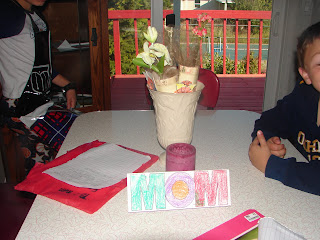 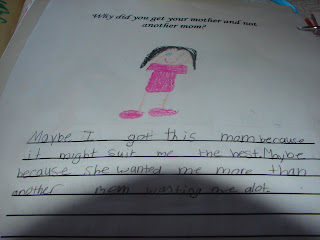 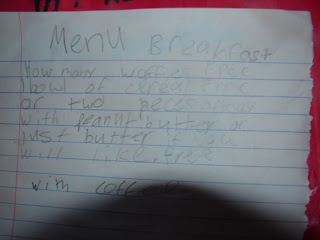 Glad to hear that is was such a wonderful day.

I'm so happy for you :o) This post brought tears to my eyes. Happy Mother's Day!

What a great day! Love the pics of the booklet and menu!

It has to be so very hard to go to church where they get so beautifully involved in Mothers day things, when you want children so much.

We went to Red Lob too! LOL! Your children, based on the pics, were much better behaved than mine. It's not even a matter of sitting still, it's like, please stop lurching, kicking and jumping on and off the seat. I had the peaches and bourbon shrimp and scallops, it was really good!

That is AWESOME. So glad you had a great day!

So adorable! Glad to hear you had a wonderful day!

That is SO awesome. It sounds like you had a wonderful, if sorta early, day.

This brought tears. So, so sweet.