Ok. So, I was really excited to see the new Alice and Wonderland movie. And, I was not disappointed. I believe I feel a new obsession coming on. I hearted the movie. In fact, I felt it was so good, entertaining and magical, that I will try to see it again in theatres...AND buy it when it comes out on DVD.

If you have the chance, go see it. Yes..its wierd..but so is the original story. Yes, the writer was probably on drugs, but it doesnt mean it isnt any less fun. I smiled many times during the movie, I was captivated.

Of course, not much needs to be said about the acting job done by Johnny Depp as the Mad Hatter. It was of course, superb. Helena Bonham Carter as the red queen was nothing short of perfection. I loved the heart drawn on her lips in lipstick and I want to do that to my own lips, just for fun. Oh, and the very strange Crispin Glover was in it too, which was a pleasant surprise for me...although I should have known he would be.

It was a visually pleasing movie...lots of eye candy to captivate. Just a beautiful to look at. I especially loved the red queens castle...all white black and red, which I have a lot of in my own house.

That wasnt the only similarity between the red queen and I however. She loves a "warm pig belly to put my feet on"...and hey, I love a warm dachshund belly to put mine on. 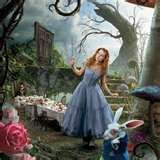 When it was advertised on TV, I announced to the family that I was going to see it. My 11 year old son said, "not me, it looks too creepy", my seven year old boy agreed with him, as he often does. Fine, I said. S and I will go. My hubby was not in the room so I didnt get his opinion on it.


When it came time to go, the boys changed their mind and went with us. A covered his little eyes once during the movie (no spoilers here), but afterwards when L said that it wasnt all that creepy, A once again agreed.

I think it looks a lot creepier on the commercials than it actually is. I think it is a movie the whole family can enjoy. Mine will be enjoying it for a loooong time to come, because I have a feeling its moving high up on my favorite list, which means it will be on a lot in my house for years to come.

Right after the movie I thought: Where in the world was the Jefferson Airplane song, "White Rabbit"? THAT was the only disappointment for me, that this song was NO WHERE in the movie. Now that I have been singing that song to myself now for days, I have remembered that the drug references are thick as reefer smoke in the lyrics. Being that a lot of kids will see this, it was probably a good idea to use a different song. My bad. Hollywood did the right thing...go figure.

Posted by obladi oblada at 1:07 PM

cool beans! It IS a weird book, huh? Thanks for the recommendation. As always, I love your tunes.

I definitely plan to see this movie because after all, who doesn't love a warm belly for their feet?

I can not WAIT to see this.

P.S. I have been loving my big pit bull space heaters under the covers at night. They don't even mind my cold feet being pressed up against them.

We have been debating whether to see it or not. Thanks!

We went to see it last Friday. Everybody (ages 7 to 49) enjoyed it. The kids wanted to leave before the credits rolled -- but... I thought that was Crispin Glover (I was thrown off as he seemed less weird than usual).

I sang White Rabbit to myself when Alice was drinking the potion.