Confession of a Stalker 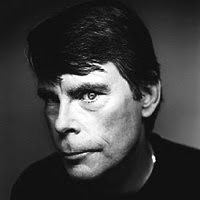 I have a confession to make. Some people know this about me, but most people do not. I stalked a celebrity...not like in a BAD way really. Is it stalking if you only do it once? Well..it sure felt like stalking to me.

Once upon a time, a long long time ago, before we had the kids, my husband and I lived in New England. New Hampshire to be exact. We took off one weekend for a road trip, as we often did before the kids. Our destination? A certain little town in Maine. Okay...people who LIVE in Maine may not think it so small...but trust me, its small. In this town...lives a certain awesome writer of horror novels and movies. He is an literary icon....and a hero to me. I knew that he resides a few short hours from us and that he lives in a unique house which to me, someone who has been accused of being morbid, was in itself worthy of seeing. I didn't actually THINK this literary giant would be there..and if he was I certainly didn't think I would SEE him.


How did I know where he lived? Some of you might be guessing the Internet. Nope. I had a coworker who grew up in this town and told us EXACTLY where it was in this town. Sweeet. I love having connections. 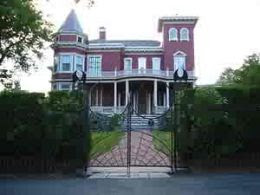 Anyway, the first night we stayed in a different town about the half way point to our destination. We hit some antique stores, ate some dinner, and watched some TV at the hotel. At the time we only had Marco (R.I.P), our Italian Greyhound and he accompanied us everywhere, present stalking expedition not excluded.

The next morning we got up very early....and hit the road. We made it to this town and were starving so we ate breakfast at a little diner in town...a little diner that we just happened to know, through interviews, and other sources that this author ate here and conducted several interviews here. I bought a coffee cup from this diner and it now sits on my desk at work, holding pens...I'm not about to ruin it by drinking out of it and running it through a dishwasher.

After breakfast we headed to the address of the author's house. After all we just wanted to see the house, as that is all we were expecting. I got all excited when we stopped at a stop sign at the crossroad of this street and there it was....the house. It was amazing that here we were....looking at HIS house. It was his too, we knew for sure, as it is very distinctive and his been featured on TV shows about him.

What happened next freaked us out....We saw the top of the door open (well, the whole door opened it was just the top that was visible due to the fence surrounding the house), and saw a ball cap clad head exit through it. It was HIM. We were sure...he wore ball caps and he is tall, as was the person who exited. So, in a panic we turned and went down the street...we were freakin' and discussed what to do...we would drive by again to see if it is really HIM. We did and this time we could SEE him, all of him...walking down his driveway with his dog. We went around the block again (yes, I am a dork)and had the idea that T would drop me off at the corner and I would take our dog, Marco and walk down the street with him...you know pretending I was just out walking my dog...and not really looking for this very famous person.

So, that's what we did....the timing could not have been perfect...by the time I got to his house, he was in front of the gate with his dog. He was on the sidewalk, and I was in the middle of the street (I don't know why, like I said, I'm a dork). I passed him and said....nothing.

I did not say a freakin' word to him. I lost my nerve, sure. More than that I felt GUILTY...here it was a nice sunny, Sunday morning (like 8:00 am), and he was out with his dog. All the guy wants to do is walk his dog.in peace. Preferably without some freakazoid fan bothering him. SO...I just didn't have the heart to do it...to bother him. It was my gift to him....only he will never know it.

At least I think he doesn't know. Maybe he does...maybe he was walking his dog and noticed the little black VW bug pass his house...TWICE. Maybe he put it together that the weird girl in the black Ramones t-shirt, and sunglasses, walking her exotic, albeit strange little dog, came out of the black car...and was there to get a look at him. Maybe he was thinking

He didn't have to talk to me, he didn't have to tell me where to stuff my camera (he probably wouldn't have, although I wouldn't blame him if he did), all he had to do is wonder for a second what I wanted if he even noticed me at all....I'm sure he did, I was like 10 feet away.

When I reached the end of the street and rounded the corner, T was there to pick me up.

And this - present stalking expedition not excluded - freaking cracked me up.

How funny is that! I'm not a stalker. Lol! But I have been start struck before. A celebrity was in my face and I said nothing. I wanted to, I just couldn't. I tried, believe me!

That was a long time ago, if I met a celebrity tomorrow hopefully the outcome would be different. I can only hope.

By the way, I'm popping in from SITS! Welcome!

So glad you're trying out SITS, girl! I just love it and I'm sure you will too... have found a LOT of good blogs that way!

That would be AWESOME. I'm sharing this with my husband when he gets home. He loves SK! :) And their house is awesome, no?

Hilarious! I once rode on a plane (yes, a *plane*) with Kate and Charlie from LOST and when they walked past I wanted so bad to say "Love your work" or "Can I take a picture with you" or whatever but I just couldn't because I felt bad about bothering them.

Yes I had my IG for about 13 years. Perfect breed of cat people, he was so much like a cat..withour the evilness though.